Well I just realized it has been a really longtime since my last post but this year I will try and be more consistent!

What has happened since my last post?  Lots of things but 2014 was a great water year and fishing was spectacular until early Nov. because of the warm fall days.  My wife and I had our first son in November named Flint Travis Jones.  He just had his 12 week birthday yesterday and he is growing rapidly and really fun to be around!

We have had a decent winter up here although it has been really warm the last three weeks or so.  The Snow Pack is still near 100% or more.  Spring fishing will be awesome this year since the warm up is happening now instead of in March.  We should have good water through the summer but nothing extremely high like in past years.

I have been working on a New Bitterroot Boatworks skiff for the last couple of months and am almost done.  Should have it on the water in the next few weeks!  Come fish with me in it! 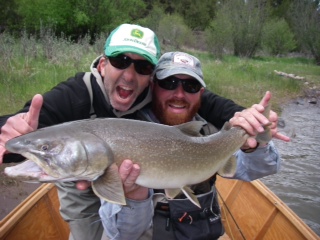 I have room in Late April, late May, Early June, August, Sept. and Oct. so get a hold of me if you want to get in the books for 2015!  See you all on the water!  karl@sheerwaterguides.com
Posted by Karl Jones at 8:35 AM 1 comment: